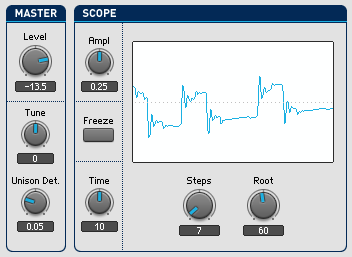 About a year ago I fell under the spell of Aleksi Perälä’s album MU3. I listened to it whenever I could, and heard it in my head when I couldn’t play it. It was subtly, maddeningly different, and stood out from the other new electronic music I was hearing around that time. It sounded pleasantly detuned, but not randomly so. What was he doing?

Turns out what he was doing is called microtuning. That doesn’t mean messing with the fine tune knob on one or more synths – it means meddling with some of the fundamental assumptions we have about music.

In almost all “modern” “western” music, we use a 12 note equal-tempered scale, which means that we divide the octave into 12 equal slices. This has advantages and disadvantages: you can play equally in-tune in all keys, but you can never have perfectly pure intervals in any of them. It’s a compromise between perfection and practicality. The more you read about tuning systems the more you will realize that there’s really no such thing as being perfectly-in-tune.

But this can be a good thing – it can be liberating! What if we don’t divide the pizza up into 12 slices at all – what if we divide it up into a different number entirely? We just might end up with a spicier pizza. For example:

Harry Partch divided up the octave into 43 notes. And not without rhyme or reason either – you can get lost in his theory for a lifetime.

Then there’s Wendy Carlos, who designed her alpha, beta and gamma scales according to note-to-note ratios that don’t even produce octaves! I wish I could post the title track from Beauty in the Beast which used to be on Youtube but now seems to have been taken offline. If you ever come across it, give it a listen because it’s awesome.

But you don’t have to travel to the avant garde and work through abstract academic theory to hear examples of microtonality – there’s always the blue note lurking in jazz and blues. Moving a bit further afield:

I’m not sure of the scales being used there – Arabic scales vary regionally, but in general there are more notes than in the western classical scale, often with a basis in the quarter tone scale or the 17 tone equal temperament scale.

So how do you jump in the microtuning game? As a Reaktor user there’s a number of ways – here’s one from the user library, and here’s another. A nice feature of that second one is that it produces the Wendy Carlos alpha and beta scales algorithmically, as well as the Bohlen Pierce scale. Just recently, someone else added yet another microtuning macro.

The problem with this kind of macro upload to the library is you have to wire it into an instrument yourself, so for some instant gratification, here’s the venerable Reaktor Soundforum Synth with one of my own pitch manipulation macros already applied. 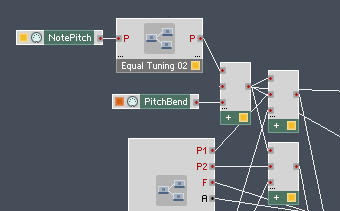 This macro does equal-tempered tuning and is an easy way to get your toes wet in the world of microtuning – just set the number of divisions of the scale and you’re off. It’s easy to see how to fit it into one of your own instruments – just place it in between incoming pitches and your oscillators (and filters, if they’re pitch controlled).

Taking a quick look at the internals – what this macro does is subtract the “root” pitch from the incoming MIDI note, then multiply what’s left by 12 divided by the number of notes in your altered scale. Then we add back in the root value to bring the pitch up to the correct range. Let’s say you’ve set the root to 60 – so that a middle C will play unaltered – and you’ve set your octave to be divided by 7 notes. Then you hit the E note above middle C, MIDI 64. The result is going to be (4 x 12 / 7) + 60, or 66.8657, rather than a straight MIDI 64. This is how we trick Reaktor’s oscillators into speaking a new language, with pitches that fall in between the usual pitches that would normally play at integer MIDI values.

Two of the easiest and most immediately appealing equal tempered alternate tunings are 5-TET and 7-TET, both of which will yield exotic sounding scales that are very forgiving – pretty much any combination of notes will sound good. These are great when played with a drum pad type controller, like Maschine or Quneo, which will make your fingers dance in fresh patterns to match the fresh sounds. If you’re mr. plays-the-white-keys this will break you out of that rut.

Some other scales worth exploring with this macro are quarter tone or 24-TET, and 17- and 19-TET. Remember, you don’t have to use every note, only the good ones. Follow your ears.

Once you’ve got the good microtuned sounds happening in Reaktor, where do you turn for other detuned synths? There are at least two other NI synths that do microtuning out of the box – Kontakt, via scripting, and Absynth. The built in tuning facilities in Absynth are the best onboard options you’ll find on any compiled synth. Creating an alternate tuning from scratch is simple and fast. Refer to the Absynth documentation for details.

The U-he and Linplug synths also have really good microtuning support by importing .TUN files, which you can download or create for yourself using software like Scala and H-Pi CSE. One micro-tunable sampler plugin worth checking out is Plogue’s Sforzando, which has good support for Scala’s native .SCL file format.

My personal preference though is to use a tool like Reaktor or Absynth that has detuning algorithmically built in so it can be easily changed on the fly without storing and importing tuning file formats.

So can this macro be applied elsewhere? What about Frame? What about Chroma, or the Roux sequencer? Yes, yes, yes and yes. More on that soon.

BTW: for people waiting on Vectorspace: that’s still on the table, and I hesitate to say “soon” after what happened last time I said “soon”, but it is coming… I spent the last two days whacking CPU optimization bugs that cropped up in Reaktor 5.92 and it’s looking good.