DELIGHT DELAY is a pattern-based delay controlled by a sequencer. A central display allows you to set the level and filtering rehearsals and so draw a pattern. You can set the number of repetitions (1 to 15) determine the tempo (1/4 to 1/32), adjust the stereo (mono or pingpong) and adjust the blend.

Very easy to use, this delay grooves with guitars, runs with synths, installs synchronized vibes and many other things

Delight Delay joins Boscomac’s already superb line-up of effects that includes Stellar and Echophonic, to name two of my favorites.

Behold and beware: Trevor Gavilan has released the Reaktor Ass Fister on an unsuspecting world. 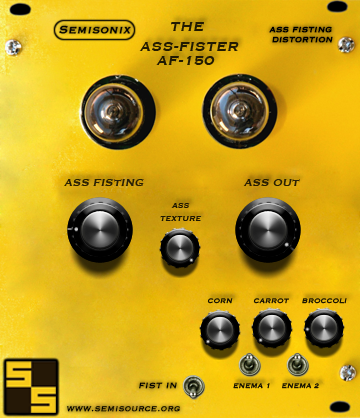 Inspired by the infamous Metasonix tube powered hardware units and with sound design by Jesse Voccia, the AF-150 is a Reaktor effects unit based around the humble slew limiter module. Amazing what you can do with simple structures in Reaktor with some imagination! Get it here, where you can also download the Semi Fuzz.

I’ve only tried it on drum loops so far and to say it utterly destroys any sound routed through it is an understatement. It can sound like a contact mic fixed to a circular saw cutting through cement blocks laced with steel rebar. That’s my first impression, anyhow. 😉

Danny J. Lewis of Music Production Tutorials tried out my free Frame 3 ensemble and liked it so much he made a brief video demonstrating what happens when you explore parameter changes in one of the default snapshots.

What’s interesting here is how deep he goes into the sound… Frame was designed for just this sort of exploration, for deep dives into detailed samples to bring out hidden goodies and details.

More on Frame 3 including download link and tutorial series

Boscomac has released Floodverb for Reaktor, a lovely sounding reverb with a control that lets you shift it from static into infinite reverberation on the fly, plus a ducking mode that brings up the reverb when you stop playing.

FLOODVERB is a special reverb that inundates your sound and plunges it into the depths of the spread. Conventionally, you can choose the level of reverb, the rate of diffusion of the reverb sound and even the color of its spread by using the band-stop filters.

But the original aspect of Floodverb lies in its three modes of actions:

Three interesting ways that make Floodverb is a unique effect. Let yourself go snorkeling in the background of sound ocean and maybe after a few hours of music, you will see some dolphins …

Get it here. As usual, it’s free, but users who appreciate Boscomac’s wonderful ensembles are encouraged to leave a donation.