Boscomac, if you don’t know him already, is the creator of a treasure trove of Reaktor ensembles, both effects and instruments, from the traditional to the extreme. The one thing they all have in common is beautiful sound and beautiful photorealistic interfaces.

Now there are new versions of Claviness and Wurlitsar, two of his keyboard oriented instruments. Go get ’em! And don’t forget to leave something in the tip jar!

Reaktor Tips readers may remember the name Owen Vallis from this post where I discussed his brilliant use of modulo instead of a step filter to shore up Reaktor’s clock functionality for use in sequencers. Owen has been busy crafting a series of Reaktor tutorial videos and uploading them to Vimeo, the latest being a hefty overview of compressors and envelope followers:

I encourage you to check out everything on their channel, but today I want to highlight Owen’s series on X0X style sound design in Reaktor, starting with kicks:

…and moving on to snares:

…and claps and rim shots:

Reaktor can be a technical jungle and it’s easy to get lost in the details of math and programming, so it’s nice to see instructional material that focuses more on the immediacy of sound design and producing practical output. I should do more of that myself. A big thank you to Owen and FlipMu for the great videos.

A great introduction to Monark from Brent Kallmer emphasizing its amazingly detailed filters.

I’ve been receiving reports from users that Chroma has some issues with Monark – hoping to pick up a copy of Monark soon to address that. Also of course getting it simply because – I want Monark! 😉 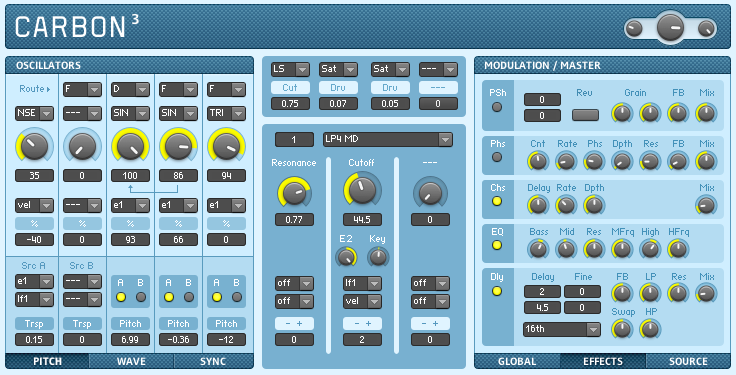 I just checked and it plays very nicely with my Chroma sequencer, particularly with the legato glide patches. Load it in a separate instance of Reaktor rather than pasting the instrument into Chroma, though, because My Carbon’s snaps are stored at the ensemble level rather than in the instrument.

After a long wait and several delays – one of which was caused by the addition of a delay mode, ironically – I present Loupe 2.

What is Loupe? It’s a Reaktor ensemble that assigns freeform sections of a sample to different MIDI notes and allows them to be pitched, reversed, resized, filtered and enveloped individually. The incoming MIDI notes do not repitch the sample directly , but you can manually adjust each slice / key’s tuning to create more complex melodic variation out of your source sample.

It works fantastically well to transform and remix a five to ten second musical phrase, a beat loop, a few seconds of a full song, or even a field recording of a drunk guy swearing at a lamp post. There is music lurking everywhere, sometimes in other music, sometimes in the notes between the notes, in the hissy crackle of decaying note tails on old vinyl samples, and Loupe will help you find it.

There are slice copy and paste buttons, so you can create slices with small variations on different keys or in different octaves. This video provides an introduction to Loupe in general as well as the new features in version 2: 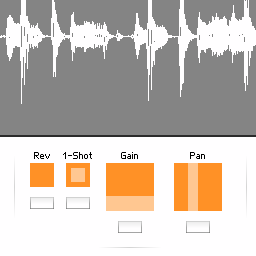 Update May 8, 2013: Loupe 2.0.1 now has a per-slice “single shot” option so a slice plays only once even if you hold down the note. This is much more useful for sliced beats especially. I’ve added a few snaps to showcase the one shot feature.

There is also an improved button style for both the “reverse” and “single shot” controls – just click on ’em instead of clicking and dragging.

Also, I’ve added an envelope to the slice animation, so the markers fade in and out with the envelope. It’s a subtle difference but looks pretty snazzy.

I will have more info and demos soon regarding the new features but I wanted to get this update out to the user base ASAP. Download links have been updated and the Loupe 2 password you received will decrypt this update. Enjoy!

It is super CPU friendly! On my 4 year old Core 2 Duo iMac, it uses around 6% CPU with four voices – that’s 6% of one core, mind. If you want to use more voices, just adjust the instrument properties tab, but I find four is a nice balance since sampled material tends to be timbrally rich to begin with and you probably don’t want too many voices playing at once. 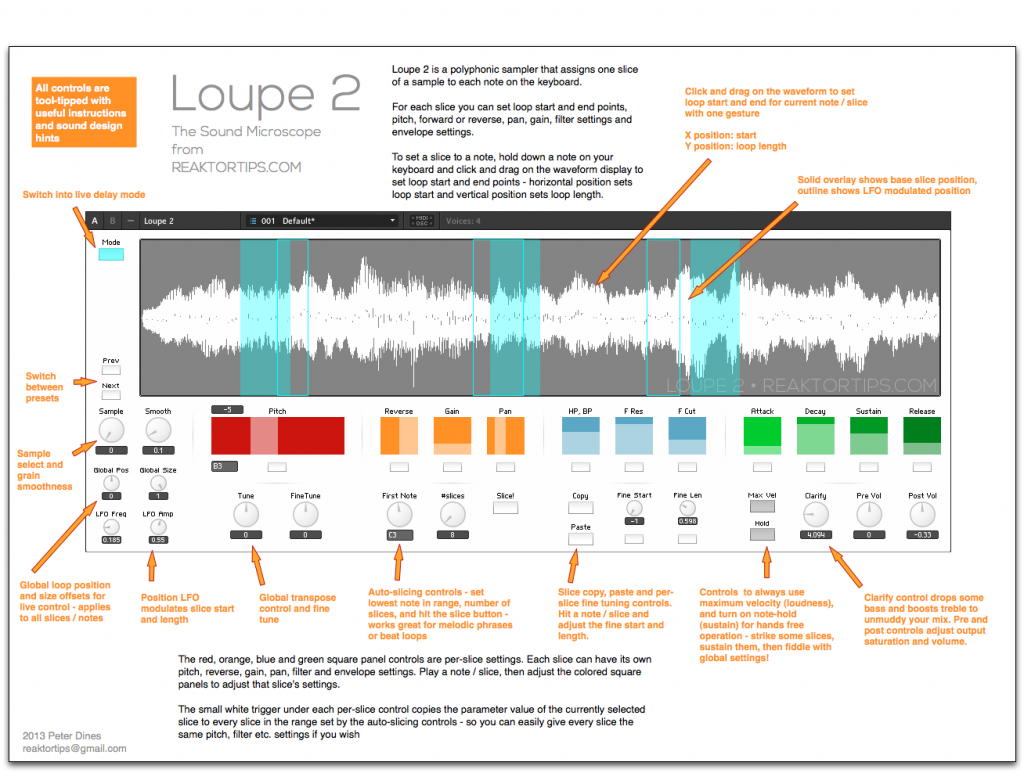 First of all, it looks nicer! I don’t know about you but to me looks matter and I find I use a tool more if it’s visually appealing. The controls have been rearranged into more logical groupings.

There is a new autoslice feature. Select a first note and a number of slices and Loupe will slice the sample into that number of slices and assign the slices to that note and the subsequent notes going upward on the keyboard. Let’s say you create twelve slices from middle C upwards. If you then slice from the C above middle C upwards in 16 slices, the previously sliced middle C range will be undisturbed. The “set all” controls below the per-slice parameters have also been modified to only affect the currently selected range. Note: in the presets in Loupe 2, I’ve used the the 16 notes from middle C upwards.

Naturally, you can still assign freeform loop segments by dragging on the waveform with the mouse. There are also fine start and fine length controls that are easily MIDI-assignable – after slicing a wave into even chunks, you can use a MIDI (or OSC) controller to play one note after another and fine tune the per-loop position and size from your control surface.

The reverse control now reverses the exact current area of a slice, instead of flipping over to the area prior to the current slice area. I find this is more intuitive and is what users expect from a reverse control. It also works a lot better with drum loops. Why didn’t it work this way in the first place? Mea culpa, gentlemen, mea culpa.

There is now a “clarify” control that drops the bass and boosts the treble, a one gesture EQ effect that I often use to help a sampled musical phrase fit into a new track and stand out without muddying the mix.

Another HUGE change is the new delay mode: 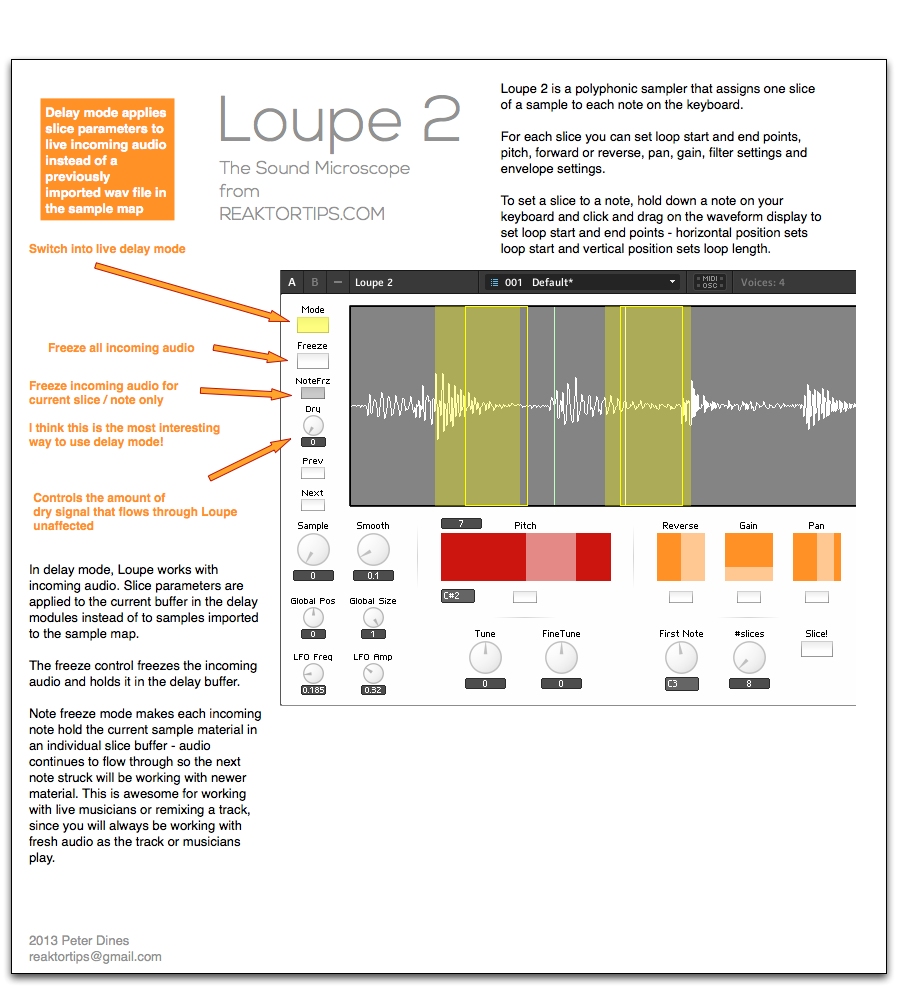 There’s also a number of small bugfixes and enhancements – little persnickety things I discovered as I overhauled the instrument – as well as new samples and presets, though if Loupe is the kind of instrument that appeals to you, you will certainly want to import your own samples and create your own sounds. Loupe is a creative tool, not a rompler. If you have a few gigabytes of field recordings and choice vinyl and tape samples, have I got the tool for you…!

The encrypted archive for Loupe 2 can be downloaded here. When you buy, you will be emailed a code to unlock the archive. Please provide a valid email address!!

Loupe 2 is a Reaktor instrument and requires a full installation of Reaktor 5.8.0 or newer. It will not work with Reaktor Player.

Loupe 2 with its major new features is a separate instrument from Loupe 1 and it won’t be a free upgrade to Loupe 1 users. I am however introducing an amnesty period – if you bought Loupe anytime from September 2012 until now, you get Loupe 2 for free. Please be patient as I send out updates.

Now, what about my other sampling instruments – Mirage and Paramdrum? Am I going to upgrade them to “version 2” with major new features and charge again? No, but I will be reskinning them with the new look, plus a few minor tweaks, as point releases in the near term.

Special thanks to Felix Petrescu of Makunouchi Bento for his invaluable assistance beta testing as well as acting as a software muse, pushing for features that have made Loupe a better instrument.

Mac users: I’ve been getting complaints from people using Stuffit Expander to decrypt the Loupe 2 archive. In my humble opinion, Stuffit Expander is five pounds of shit in a two pound bag. To open a password protected RAR file use one of these:

Forgot to add: Loupe 2 comes with TouchOSC support – a template is included in the package. Set up bi-directional OSC,  and selecting a slice in Loupe updates the controls on the iPad which is… pretty cool. 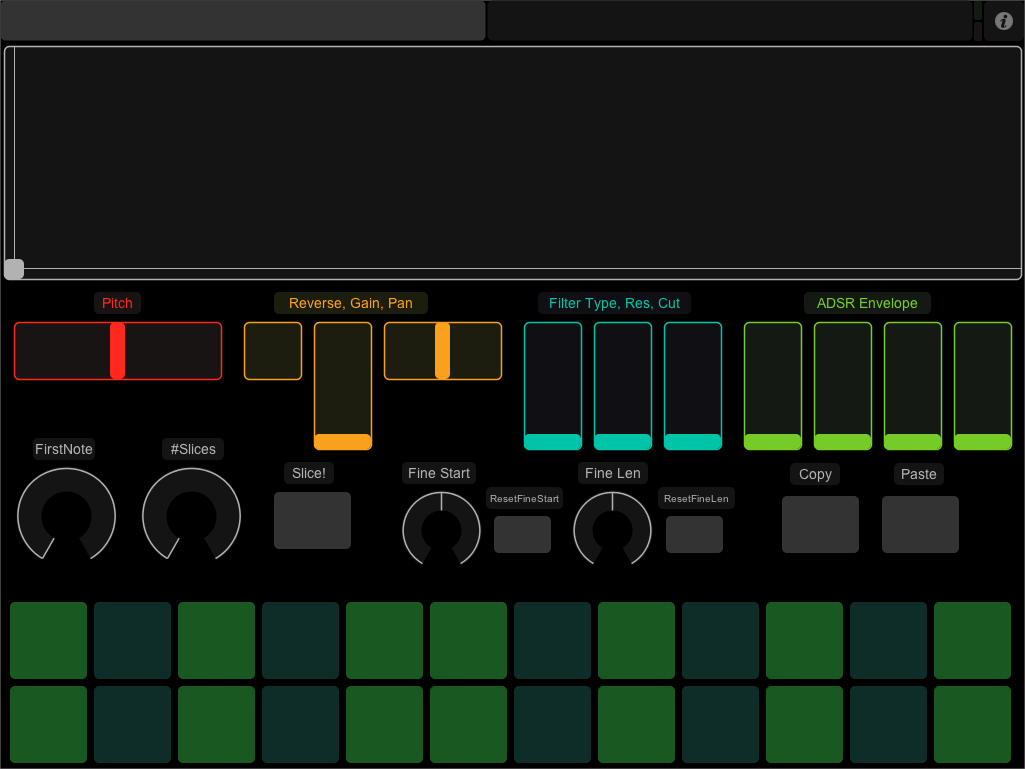 –
Loupe 2.0.2 bugfix now available – corrected a problem with auto-slicing where moving the slice # control after slicing would change the sample position.